I am Jeanine Renee, and among many other roles including Mom, pastor’s wife, and my kids’ homeschool teacher, I am the founder of SowCo Develops. To help facilitate community, I thought it would be valuable to introduce myself and let you know a little about me and how we, SowCo Develops, ended up where we are now, developing software for you.

Largely, I am a self-taught coder, and I absolutely LOVE coding. I stumbled into this profession, and I am forever grateful for this. The story of my career actually begins in high school. I never planned on getting a college degree. In high school, I was a National Honor Society student in AP courses. By the time I was in my senior year, I had worked so hard, I reasoned that if this is what college would be like, I didn’t want to do more. So, instead of going to college, I went to work for a major food-chain as a checker. After working there for just under a year, I decided that college did not seem like such a bad option after all. I had no idea what I may be interested in as a major, so I opted for taking general studies at my local community college so that I could have some time to think on this while still being productive.

Now, let’s go back to my job as a checker. While I was working, I had a regular customer who bought his dinner one day at a time, and he came through my line EVERY day. I wanted different work hours, and I voiced this each time he came through my line. One day, he told me that there was an opening at his company, and because I wanted different hours, he said he would be willing to put in my resume and a good word.

So, I gave him my resume, had an interview, and ultimately landed the job! It was an entry-level job in the information systems department where I contacted clients for data and loaded their data into the system. All I had to know was how to make a phone call, have good customer relations, and to independently follow step-by-step instructions given in the user manual. It was 1998. I had my own cubicle complete with computer and phone with a very successful start-up company, and I had regular hours, Monday through Friday, during the day! Later, looking at my embarrassing resume that I submitted and puzzled why I was hired in the first place, I asked my boss why they chose me out of any other candidate. He said that I was the only one who would take the pay they were offering. They had offered me one-cent more an hour than I was making as a checker. Score! I was not interested in pay nearly as much as the opportunity.

Now, a few months after I had been with the company, their programmer was leaving to move to Germany, and she gave two month’s notice. She told me that, if I wanted her job, she would train me before she left, and the job was mine. I was all in. She programmed in SQL, Perl and AWK using a UNIX platform, trained me to do the same, and I fell in love with it. It was as if I was working on puzzles, one of my favorite hobbies, all day, and I was paid to do it. She left, I took over her job, decided this is what I wanted to do for the remainder of my career, selected my college major as computer science, and job-wise, the rest is history. I have been in the same field ever since and pursued promotions relentlessly when they were presented. In only seven years, I went from my very modest salary to six figures when factoring in company bonuses, I was introduced as the company’s “secret weapon” as a result of the support and work I produced, and I was one of only eight people among thousands to secure the top review rating for my work at one of my subsequent employers.

After my time in corporate America, SowCo Develops was founded. It came into the picture when my son was born. I wanted to stay home with him but also continue to develop my skills in the industry. As a result, I created SowCo Develops in 2006 as a company providing contract services. This allowed me to focus on my family and have a side “gig” as a hobby. Shortly after I began the company and unexpectedly, my husband was given two offers to pastor churches, one in California and the other in Hawaii. We chose Hawaii. With this move, I still continued to work but only as a sole-proprietor, and I did not move SowCo Develops from Colorado to Hawaii.

Fast-forward ten years, we moved back to Colorado. It was then, in 2017, that I decided to venture out into the world of proprietary software! My children were getting older, their homeschool was getting more complex, and I needed a good software for dynamic record-keeping and reporting that would help me to save time on this task. I searched and searched and could not find anything that met all my needs. Hence, I decided to develop a product that would fulfill my requirements for record-keeping then put it on the market as OHR to see if it would help others as well. This has become our flagship product, and with it, we have now launched our company into the world of proprietary software in general.

With this new development and being back in Colorado, we had to once again begin doing business under SowCo Develops rather than only myself as a sole-proprietor. Since 2006, we only had a one-page, retro-looking contact card as our web site (pictured) and no other significant presence in the market because it wasn’t necessary to secure contracts. This has all changed. The launch of OHR now necessitated a more robust web site primed for customer support and the establishment of several accounts on social media in order to market, promote and communicate with our customers.

This now leads us to the present time. SowCo Develops is my family: myself, Shane, Scott, Sean, and Shannon. We are your support team along with trusted friends we recruit to do jobs when they are needed. In the future, we hope to expand our team now that we are offering proprietary software for you, and we are excited to see where this on-going story leads.

I never did finish college. As I had a full-time career and my husband and I worked on many ventures on his end as well, my course completion was slow-going. Then my son was born, and my pursuit of a degree ended there. Despite not having this, I have thrived as a self-taught coder because it makes me happy, and my professional career has been overwhelmingly rewarding and profitable. You can check out my profile on LinkedIn if you are interested in the details of my experience.

Besides all this, my interests outside of work are widely varied and include my local church and the Christian Church universal, theology and Bible studies, jiu-jitsu, kick-boxing, fishing, hiking, biking, running, and just about anything outdoors, and doing all of this with my family. We’re a tight-knit crew, and we love doing life together. 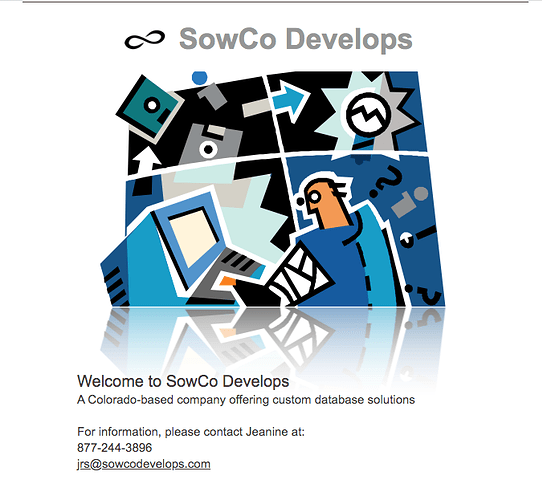